This is my second post about how i constructed my object tracking robot using .Net Gadgeteer.


Check out my first post which explains the parts i am using and shows a video of the working prototype.

The first thing i did once all my parts had arrive was try to get the motors moving. I'm going to explain in this post how to do this.

The motor controller i chose is not a gadgeteer module, and in order to drive the motors i needed 2 pwm outputs to control the speed of the left and right motors, and 2 digital outputs to control the direction of each motor. I needed to use a gadgeteer extender module to connect the required pins into a breadboard.
So that i could easily plug it into a breadboard, I soldered a header onto my extender module .

Gadgeteer sockets marked P have pwm capable pins. Pins 7, 8 and 9 are pwm capable.
There are also a few spare pins on the same socket which can be used for digital output. So we only need 1 extender module for the moment.
http://wiki.tinyclr.com/index.php?title=Gadgeteer_Sockets

Using jumper cables from the breadboard connect the pwm pins from the extender module  into the sockets marked PWM on the Motor controller. 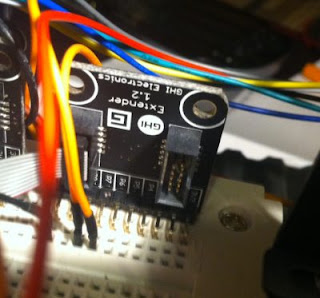 The digital outputs from the extender module are connected into the sockets marked DIR.


I then wrote a simple method to drive the motors by calling the SetPulse method on the pwm pins.

The period and high time parameters of the SetPulse method have to be provided in nano seconds.


As you can see it's still really simple to drive a motor using a non gadgeteer motor controller.

When i first tested this i wrote a simple program using the Gadgeteer joystick module to drive the motors forwards or backwards depending on which way the joystick was pushed.

Now that i could control the motors, i started working on the object tracking part which i will detail in my next post.