This is my first real project using the awesome .Net gadgeteer platform. My initial aim for this project was to build a Gadgeteer version of the robot shown in this video.

The robot can track objects at short (around 20-30cm) distances and will try to stay a set distance away from the object it is tracking.
For tracking the robot uses an ir compound eye, which is a sensor that gives an analog output depending on the level of reflected infrared light. 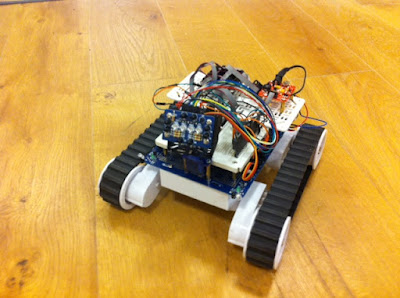 This is a video of the working prototype of my gadgeteer powered version. (apologies for the crappy quality, i'll get a better version uploaded soon)

This is the first of a series of posts detailing how i went about building it and the stupid expensive mistakes i made along the way.

The base of the robot is a Rover 5 chassis, made by Dagu electronics.

I had a couple of different options for the motor controller. GHI electronics make a Gadgeteer motor driver module, which i could have used and would probably have worked perfectly well.
However i chose the  Dagu explorer pcb  as it was designed to fit the chassis i was using and has lots of other nice features such as infrared corner tracking and multiple power sources.

Future posts will detail how i went about putting it together.