In this post i'm going to explain how to hook up the Dagu ir compound eye and pan and tilt kit to a gadgeteer mainboard in order to track objects.

I'm using the Fez Spider as my Gadgeteer mainboard. But you could use any other mainboard that has 2 analog(A) sockets and 1 pwm(P) socket

This is the third post in a series detailing how i went about building an object tracking robot using .Net Gadgeteer. Links to the first two posts below.

Check out the video below which i took when i first got this working for a demonstration of what i was trying to do.

The ir compound eye is a relatively inexpensive sensor that can be used for object tracking. It works by shining ir light at whatever is infront of it and then measuring the reflected ir. It consists of 4 pairs of photo transistors which provide top, bottom, left, and right readings.

It requires 4 analog inputs to read the sensors and 1 digital output to control the ir leds.

Gadgeteer sockets marked A can be used for analog input, however only pins 3,4, and 5 are analog capable.

So unfortuately we need to use 2 extender modules connected to 2 different A sockets on the Gadgeteer mainboard.

In order to actually track objects we also need a pan and tilt kit.

The basic idea is that if the object we are tracking moves to the left, the reading from the compound eye will increase on that side, and decrease on the other. Likewise if the object moves up or down etc.

When this happens we will move the pan and tilt mechanism to follow it.

Dagu produce a cheap pan and tilt kit designed to be used with the compound eye.
It consists of 2 servos and the pan and tilt frame. One servo controls the left to right motion and the other controls the up and down motion.

So for this we need... yet another extender module. 2 pwm pins to control the servos.
Any free socket marked P can be used for this. Pins 7, 8, and 9 are pwm capable.

In summary, we need 3 extender modules.
Make sure you get some nice long jumper leads to connect the ir compound eye pins into the breadboard so that it can move freely when used with a pan and tilt mechanism.

I've drawn up a quick breadboard diagram below so that you can see how everything should be connected. The extender modules as shown in the diagram are oriented so that the ground pin is on the left hand side. 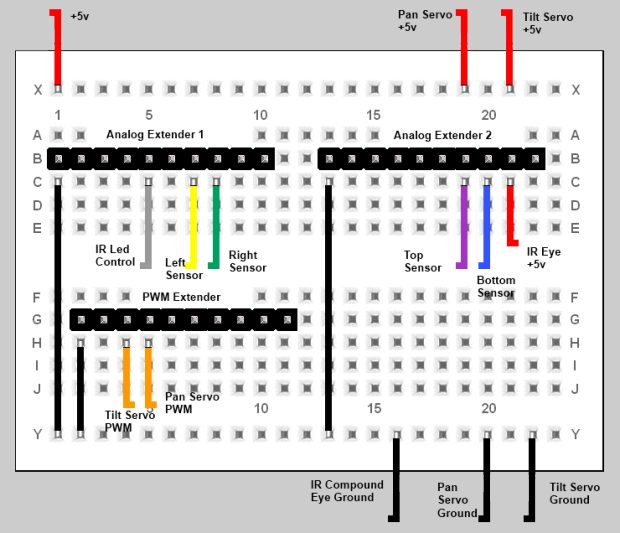 Once you have everything connected it's time to start writing some code.

Dagu provide some sample code for arduino which can be used with the ir compound eye, so it was relatively simple to convert this to c# and make it a bit more object oriented.

I'm going to explain various parts of the code below.
The complete working code can be downloaded from GitHub

First i created an IrCompoundEyeData class to contain the data returned from the ir compound eye.

Then i created the IrCompoundEye class to manage reading the compound eye sensors.

The class takes 2 Extender modules as constructor parameters. The extender modules should both be connected to A sockets on the mainboard. Pins 3 and 4 are used on each extender to take the analog reading from the sensors. Pin 6 on the first extender is also used to switch the ir leds on and off.

The IrCompoundEye class has a single public method - Read() which returns an IrCompoundEyeData object. In this method we take a reading from all the sensors with the IR leds switched on which gives us the total amount of reflected IR, including ambient light.
We then switch the IR leds off and take a second reading, which gives us the amount of ambient IR.
This second reading is subtracted from the first reading to give us a more accurate value.

The readings are returned as an IrCompoundEyeData object.

Now we need a class to manage the pan and tilt mechanism. This class also takes a single extender module as a constructor parameter. We use this to pass in the extender module which is connected to a P socket on the mainboard. Pins 7 and 8 are set up as pwm outputs.
A pwm pulse is applied to the pins to set the pan and tilt positions when the appropriate method is called.


And finally an ObjectTracker class which manages our object tracking functionality.


And that's pretty much it. Deploy the code to your mainboard and if you've wired everything up correctly the object tracker should start tracking when you push the button. Simple ;)

Get the sample code from github